(BLOOMSBURG 9-6-22): When the 167th Bloomsburg Fair takes place September 23 thru October 1, a long-time tradition will be coming back as part of the week-long activities as for the first time in 37 years auto racing returns to the Fair.

The Bloomsburg Fair is the largest agricultural fair in Pennsylvania and dating back to 1922 motor racing had been a big yearly attraction. Big Cars (Sprints), NASCAR and most prominent over that span, Midgets, took to the half-mile track.

Although well attended, the Fair races came to an end after the 1985 event due to a number of logistical reasons. Nick Fornoro Jr., won the final Fair race in an exciting duel against the Cicconi brothers, Bob and Guy, in that 25-lap SMRC feature.

Now with the Bloomsburg Fair Raceway in place the Fair Board is thrilled to bring back races on the 3/8th mile oval. Set for Thursday, September 29 at 7:00 pm, there will be two classes competing.

The FWD 4-Cylinder Stocks run under the sanction of the Sport Compact Dirt Racing Association (SCDRA) will be racing for top prize of $2500-to-win. They will be joined by the Central PA Legends.

The 4-Cylinder Stocks made their Bloomsburg debut last month with Matt Chronister of Aspers capturing the very entertaining feature.

Both classes are known for excellent car counts and very close racing due to how directly related the cars are designed. And at Bloomsburg fans will see that right away as they will be able to spread out and take advantage of the wide surface.

Proof of that came during the August 18 4-Cylinder Stock race when passing was nonstop throughout the event including at the front with several lead changes before all was said and done.

Additionally, there will be an afternoon presentation by the Eastern Museum of Motor Racing from York Springs who will have an array of vintage race cars on display and will also be allotted track time from 1:00 pm to 2:30 pm.

Of note the pit area will utilize the outside perimeter of the race track throughout the day and evening.

Pits will open starting at 10:00 am for the EMMR while all cars competing for that night races will be allowed in starting at 4:00 pm. Pits are $30 which will also allow access into the fair. Grandstand admission is $10. Admission into the fair is $8. 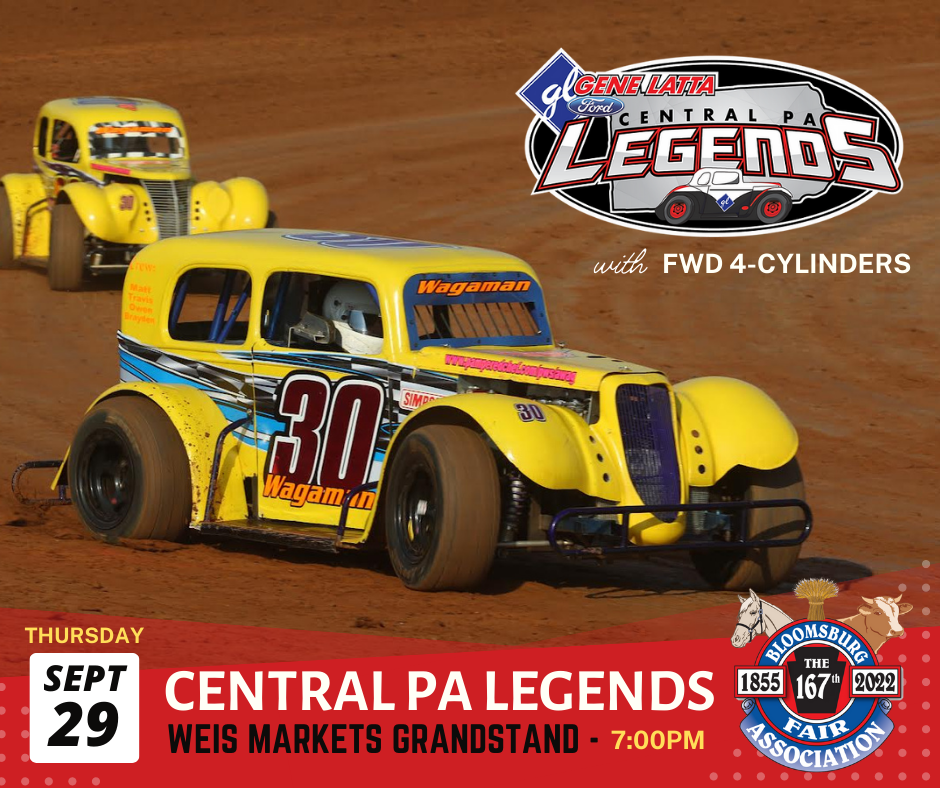